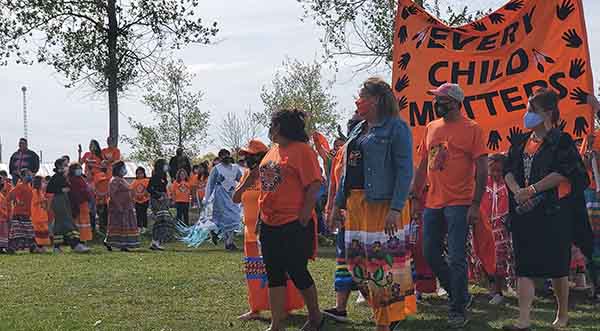 Peguis School held its fall pow wow “Ambe, Nimiidaa – Come and Dance” on the grounds behind Peguis Central today. On the eve of the first National Day for Truth and Reconciliation, Chief Glenn Hudson said: “It is so important for us being a nation, Peguis being one of the lead nations, we have many people who went to residential school at 5 or 6 of the main schools. There’s still a lot of work that remains undone in terms of that truth and reconciliation.” He reminded the gathering that although approximately 170,000 former students have been compensated, thousands more who were sent to attend schools at hospitals, provincial schools, private residences were not, and are still seeking justice. “A lot of the good work that has been done has been done by people here from Peguis,” he said. “ I want to acknowledge Ray Mason. He’s going to be receiving an honourary Doctor of Laws degree from Queen’s University for his work on residential schools.” 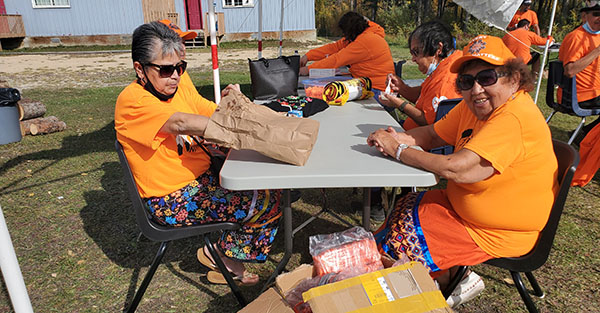 Chairperson of the Peguis School Board, Rod Sutherland, who attended a day school, spoke to the students. “When I was 9 years old, I was sent to Ninette, Manitoba. Those children, some of them Inuit, Metis, First Naitons, they never came home. They were lost. And every child matters, and they matter.”

Among the participants was an architecture student from Peguis who is currently working on her Masters degree at the University of Manitoba. Danielle Desjarlais was attending to reconnect to her roots. She is doing research on the powwow dances and traditions as part of her work on her Masters degree. “For myself, I’ve been disconnected from Peguis so it’s important to be here for meeting people, joining powwow and watching powwow.”

Against the backdrop of a large tipi on the lawn and a beautiful sunny sky, the powwow was the first large gathering in the community since the onset of the COVID-19 pandemic, albeit with protocols still being observed. Peguis is currently free of active cases, and no one is under isolation. The entire school was out, classes remaining in their grade groupings – for the most part. Elders and parents and grandparents numbered at least 150. With everyone in a celebratory mood and decked out in regalia and orange T-shirts, the dancing began with the grand entry led by Chief Glenn Hudson and Peguis School Board chair Rod Sutherland. Flag bearers followed, Councillor Martin Favel carrying the Manitoba flag, Councillor Wade Sutherland, the Peguis flag and school board member Allan Cochrane, the Canada flag. Master of Ceremonies Dave McPherson provided colour commentary, sprinkling humour into his emceeing duties throughout. The Loud Eagle Drum group performed their sacred role as they laid down the beat for dancers and voicing celebration, love and peace to all who came to gather.